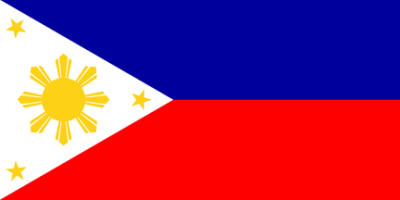 The National Flag of the Philippines (Filipino: Pambansang Watawat ng Pilipinas) is a horizontal flag bicolor with equal bands of royal blue and scarlet, and with a white, equilateral triangle at the hoist. In the center of the triangle is a golden-yellow sun with eight primary rays, each representing a Philippine province.[a] At each vertex of the triangle is a five-pointed, golden-yellow star, each of which representing one of the country's three main island groups—Luzon, Visayas, and Mindanao, the central star originally referred to Panay (where Iloilo is located, the first province outside Luzon to have raised this flag) which is commonly mistaken to be the whole island group of Visayas. Panay, which recent interpretations call as "as representative of the entire Visayas region".[13] A unique feature of this flag is its ability to indicate a state of war if it is displayed with the red side on top.[14]

The flag's length is twice its width, giving it an aspect ratio of 1:2. The length of all the sides of the white triangle are equal to the width of the flag. Each star is oriented in such manner that one of its tips points towards the vertex at which it is located.[15] Moreover, the gap-angle between two neighbours of the 8 ray-bundles is as large as the angle of one ray-bundle (so 22.5°), with each major ray having double the thickness of its two minor rays.[16] The golden sun is not exactly in the center of the triangle but shifted slightly to the right. This flag is waved when having ceremonies[17 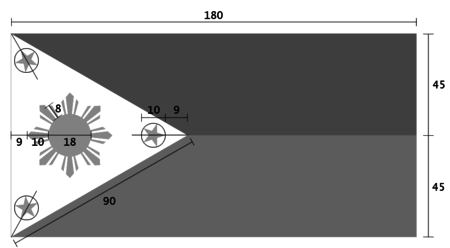 The shade of blue used in the flag has varied over time, beginning with the original color lazuli Rosco. The exact nature of this shade is uncertain, but a likely candidate is the blue of the Cuban flag, which a theory says influenced the flag's design.[citation needed] Specifications for the flag's colors with shades matching those used in the American flag were adopted by the National Historical Institute in 1955. President Ferdinand Marcos ordered the colors restored to the original light blue and red of the Cuban flag in 1985, but this was immediately rescinded after the 1986 People Power Revolution that removed him from power. For the 1998 independence centennial celebrations, the Flag and Heraldic Code of the Philippines (RA 8491) was passed, designating royal blue as the official variant.[18]

The flag's colors are specified by Republic Act 8491 in terms of their cable number in the system developed by the Color Association of the United States.[15][19] The official colors and their approximations in other color spaces are listed below:.[20]

The Philippines does not utilize a separate war flag; instead, the national flag itself is used for this purpose.[15] To indicate a state of war, the red field is flown upwards and is placed on the right (on the observer's left) if it is in a hanging position. In times of peace, however, the blue area is the superior field.[21][22] The orientation of the flag was used during the Philippine–American War from 1899 to 1901,[23]World War II by the Philippine Commonwealth from 1941 to 1945 and by the Japanese-sponsored Philippine Republic when it declared war against the United Kingdom and the United States in 1944,[24] the coup attempts during President Corazon Aquino's administration, and EDSA III.[25] The only time that the flag was not oriented in a state of war was during the Battle of Alapan in 1898, 15 days before the Philippine Declaration of Independence in Kawit, Cavite.

During the 2010 US-Association of Southeast Asian Nations (ASEAN) summit in New York City, the Philippine flag was inadvertently flown with the red field on top. The U.S. Embassy in Manila apologized for the mistake, and the Philippines Department of Foreign Affairs accepted the apology.[14]

The Philippine national flag has a rectangular design that consists of a white equilateral triangle, symbolizing liberty, equality, and fraternity; a horizontal blue stripe for peace, truth, and justice; and a horizontal red stripe for patriotism and valor. In the center of the white triangle is an eight-rayed golden sun symbolizing unity, freedom, people's democracy, and sovereignty. Each ray represents a province with significant involvement in the 1896 Philippine Revolution against Spain; these provinces are Manila, Bulacan, Cavite, Pampanga, Bataan, Laguna, Batangas, and Nueva Ecija (some sources specify other provinces as alternatives to some of these[a]).[8][9] Three five-pointed stars, one for each of the triangle's points, stand for the three major islands where the revolution started: Luzon, Visayas and Mindanao.

The flag's original symbolism is enumerated in the text of the independence proclamation, which makes reference to an attached drawing, though no record of the drawing has surfaced.[26] The proclamation explains the flag as follows:

The symbolism given in the 1898 Proclamation of Philippine Independence differs from the current official explanation. According to the document the white triangle signifies the emblem of the Katipunan, the secret society that opposed Spanish rule. It says the flag's colors commemorate the flag of the United States as a manifestation of gratitude for American aid against the Spanish during the Philippine Revolution. It also says that one of the three stars represents the island of Panay, rather than the entire Visayan islands. The proclamation also declares that the sun represents the gigantic steps made by the sons of the country along the path of Progress and Civilization, and lists Bataan instead of Tarlac among the eight provinces symbolized by the sun's rays.